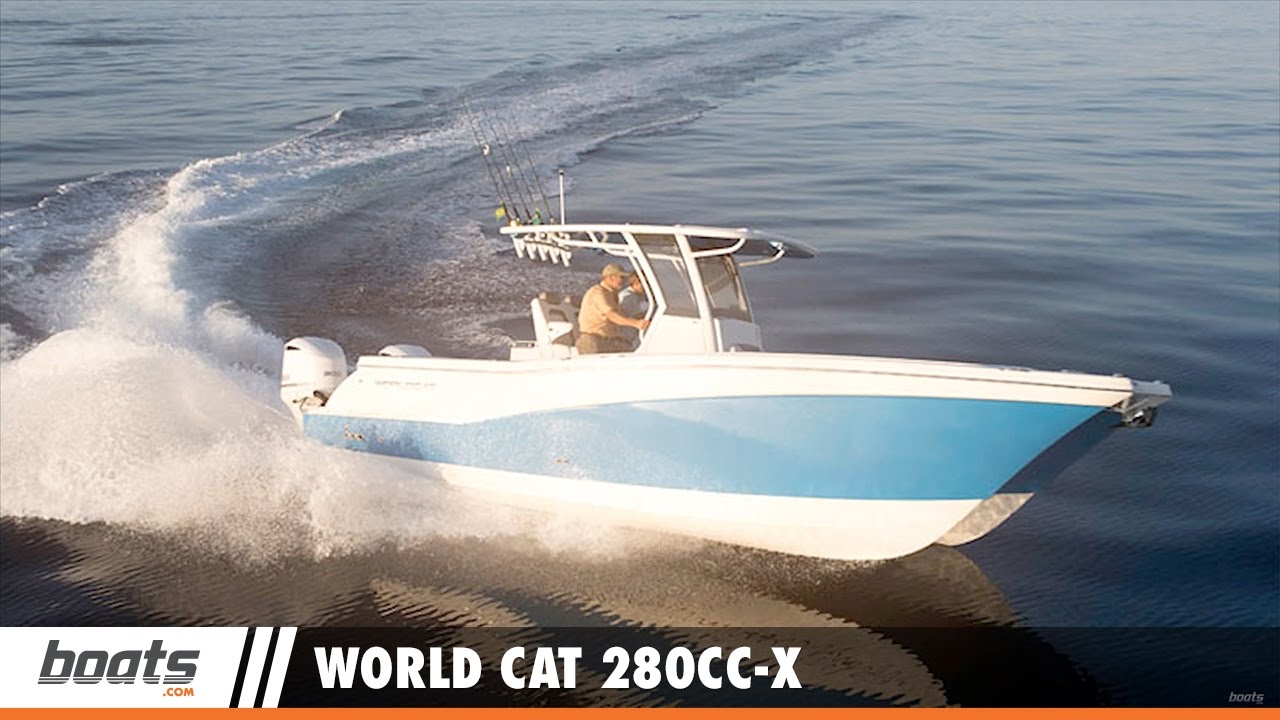 Boaters who buy a powercat often do so because of the smooth ride. But many boaters who might otherwise get a cat admit that the number-one reason they hesitate is the boat’s unusual looks. Powercats do look non-traditional, for sure, and though it’s completely subjective, some would say they look down-right ugly. Those boaters weren’t in the convention center hall during the Fort Lauderdale boat show, looking at the all-new 2017 World Cat 280 CC-X. Check it out for yourself.

As you can see watching the video, the head-on bow view of this boat is utterly spectacular. The radiused tunnel, through-the-hull anchor, automotive grill-like fascia, and forward-curving stems give the 280 CC-X an aggressive, on-the-attack look. Yet on the profile the design incorporates a sweeping color-accented hullside, slight tumblehome in the transom, and stainless-steel accents.

Looks, of course, aren’t everything. And if the 280 CC-X couldn’t back up the image with a smooth ride it wouldn’t be worth our time to talk about it. But this hull is an all-new design and those radiuses inside the tunnel weren’t intended to play a role in the boat’s appearance in the first place. They’re larger because that makes the boat stronger. And the new center pod design and rubrail lip aren’t meant to look cool, they’re designed to knock down spray and sneezing. Getting wet at the helm was never much of an issue with larger powercat models, like the World Cat 320CC, but on virtually all small powercats it can be an issue in certain conditions.

Another common powercat issue is how to rig the anchor. Either a pulpit has to be molded in between the twin hulls (adding to the powercat’s odd appearance), or the anchor has to be stowed in a locker. Going through the hull, as is commonly seen on slick-looking modern V-bottoms, simply wasn’t an option. Until the 280 CC-X. This is the first production powercat of its size and type we’ve ever seen that has a through-hull anchoring system.

Another first on the 280 CC-X is the joystick control. We’ll stipulate that twin-engine powercats tend to handle much better than monohulls at dockside (because their engines are spread so much farther apart, and thus they spin the boat more easily when opposed) and most captains probably don’t “need” a joystick on a cat. That said, docking is one of the biggest challenges new boaters face, and if the joystick makes someone feel better about their docking abilities we’re all for it.

Believe it or not, that’s not the end of the “firsts” for this boat. It’s also the first cat of this size and type to have a 12” glass helm with digital switching system. And this is a standard feature, too, not a cost-adding option.

Fishing-wise, the 280 CC-X is ready to roll right out of the box. It has insulated port and starboard 355-quart fishboxes in the deck, which are evacuated with diaphragm pumps (the kind that don’t choke, gasp, and die when you run a bunch of fish scales through them). These boxes are large enough to swallow up a pair of 100-pound bluefin. They also have locks on the hatches and fold-out racks so you can keep rods in them, however, in my experience locking fishing gear in a fishbox that’s below deck level is never a good idea. They always hold moisture and unless you relish the thought of mold growing on the grips of your prized fishing rods, you won’t banish them to such a fate for longer than a day or two. Fortunately, there’s enough room in the head console to stow some gear, and when you look at it take note of the fixed freshwater head and Corian counter with stowage.

Other fishing features worthy of note include eight stainless-steel gunwale rodholders, a 30 gallon insulated livewell in the leaning post, a tackle stowage compartment also in the leaning post, and multiple coolers in the bow area totaling another 408 quarts of insulated stowage. The five-holder powder-coated rocket launchers for the hard top and the 18’ Taco Grand Slam outriggers are optional.