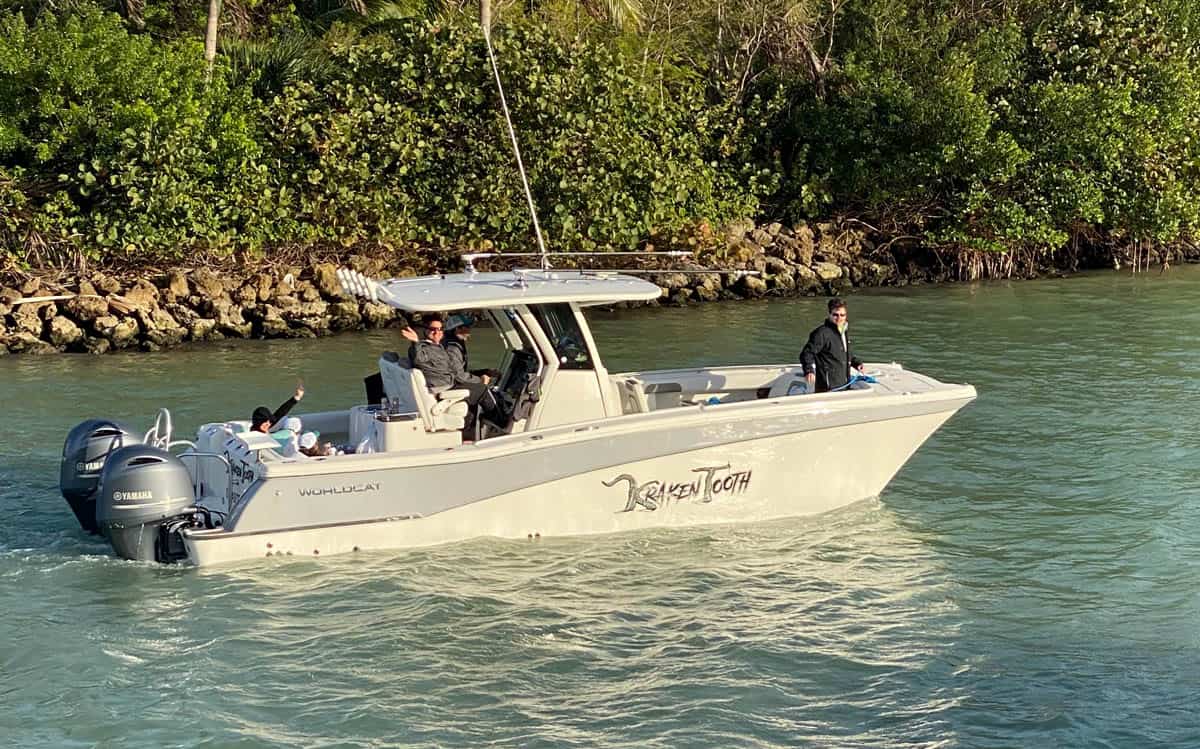 Are you deciding whether or not to get a Center Console? With the comfort provided by World Cat Center Consoles, we can make that decision easier. The World Cat Center Consoles are built for both the family and hardcore anglers. 360-degree fishability is a key feature of Center Console boats, World Cat center consoles are no exception with some of the largest aft and bow cockpits in their class. The catamaran design allows for the bow cockpits to extend further than those of a traditional monohull design. This provides more room for family and friends while maintaining fishability. The extra room and comfort are some of the main reasons professional fishing charters love World Cat boats. As you would expect each Center Console model is outfitted with fishing accessories like live wells and rod holders for the ultimate fishing experience.

All World Cat Center Consoles offer a roomy yet functional cockpit, perfect for a single angler or with fellow anglers aboard. An advantage to a catamaran center console is in the stability forward design.  The wide and stable hull designs offer sea keeping ability comparable to boats much larger. The sea keeping ability and stable feeling is an advantage for seasoned fishermen and novice boaters alike.

The catamaran hull design also offers stability no matter how the weight is distributed on the deck which means less listing.  Listing is an unfavorable condition when weight shifts among the deck causing the boat to lean to one side. World Cat Catamarans minimize listing no matter the shift in weight distribution.  Making loading gear for a big day out on the water and loading passengers a safe and easy experience. Being able to have many anglers freely moving deck, is a large advantage over monohulls. We all know that when fishing once the trophy catch is on the line anglers aboard want to check it out. In a catamaran everyone can safely help ensure the trophy catch gets on deck.

In addition to the stability offered by World Cat catamarans, the ride is second to none.  Are you tired of the pounding and slapping of a Monohull? If so it’s time to take an Ultimate Sea Trial aboard a World Cat!  World Cat boats deliver a smoother, softer, faster and drier catamaran ride in even the roughest conditions. The secret – and science – behind this better boating experience is intelligent engineering – which incorporates our VectorFlo® hull design. A part of the design, a Vector Pod, forward in the hull, helps to break up incoming water, creating aeration and reducing friction. As the mixture passes through the narrowing tunnel channel, it increases velocity, while decreasing forward pressure and drawing the aerated water and spray aft through the tunnel.

We’ve covered the space, stability, and smoothness of our World Cat center consoles. Ultimately though when looking for a new fishing boat it has to have all of the features you would expect and more.  Strategically laid out through all of our center consoles are rod holders placed to create the ultimate fishing spots throughout the deck. We’ve also built-in integrated tackle storage, easy access drawers, live wells, fish boxes, and coolers.  Several of our Center Console models have built-in bait stations with fresh water to make preparations clean and easy. Live wells and fish boxes are important to all anglers, and we have laid out our models for optimal space and usability.

All of our World Cat Center Consoles have gunwale rod storage, but to take that a step further we have integrated locking rod storage into our new 325 Center Console model.  The locking rod storage not only locks but hides the reels themselves which is a valuable feature for many anglers. Another Feature we have begun to integrate into models are quality cooler/boxes with removable cushions that you can choose to leave in the aft deck or remove to have even more space with fighting the trophy catches. These cooler/boxes when left against the transom provide a comfortable seating option for heading out to your secret fishing spots.

The World Cat Center Console line up is ever-evolving and is designed with the angler and family in mind.  If you have not had the chance to experience a World Cat Center console, you are missing out. Check out this webpage to schedule your Ultimate Sea Trial.

Scroll to Top
We use cookies to ensure that we give you the best experience on our website. By continuing to browse the site, you are agreeing to our use of cookies.OkPrivacy policy